Conclusions of the conference: 30 years of activism

When I happen to be the last defender in a row, in trials with lots of participants, I often begin my closing argument saying that this looks like a double-edged sword: on the one hand one can refer to points already made, thus saving time, on the other hand one has to give effort to keep the interest of the judges alive.

There are two major differences in the present case: firstly, the points already made by the colleagues so far have given so much food for consideration that I couldn’ t even sum them up within few minutes so I just picked a couple of them to comment on; secondly, speaking to you makes things significantly better than facing sleepery judges’ faces…!

30 years are surely a good motivation for reflecting: reflecting upon experiences, terms, definitions, perspectives. At the same time many things have changed.

The difficulties emerge right in the first moment of the reflection on AED-subjects: who are we talking about? How can we define ourselves?

Left-wing lawyers: My personal dislike for this term had originally to do with my personal political preferences. But the current political situation has further complicated the situation.

And after all: what is called a lawyer who defends demonstrators in Venezuela fighting against a left-wing government? When the greek left-wing minister of justice openly seeks to interfere in a trial even if this happens in favor of a demonstrator, what is called the lawyer who protests against it and seeks to defend the separation of powers? I can only say that the term „left-wing“ appears to be rather problematic.

Movement lawyers: once again we run into theoretical burdens by just staring at the multitude of movements. Movements do unfortunately no longer move only to an emancipating direction, thus making the world more complicated. Movements can be very reactionary. What about the anti-abortion movements of catholics in Poland who, after all, fight for the fundamental right to life? Or the movements against ROMA-people who build militias in Ungarn?

I’ll give an example:

In Greece, gold mine workers fight for their right to work, against the closing down of the mines. They also fight against a left-wing government and three days ago they even occupied the ministry. But their fight is completely anti-ecological, so there’s a kind of civil war going on between them and the anti-gold movement I defend. But aren’t the workers a movement themselves?

Progressive lawyers: this could be an acceptable compromise, though not the best. Progressive can exclude reactionary lawyers, when it comes to movements and signalises the fight against stagnation. For sure you want to get things rolling towards a better future. But what should be the characteristics of a progressive lawyer?

I was very happy to hear Anne Maeschalk‘s remark that introduced the criterium of quality of work: a progressive lawyer in the first place should acquire particular competences so as to be useful, in other words he/she has to be a good lawyer. It serves nothing to supply somebody with legal support of low quality. Unfortunately the latter is often the case back home, when it comes to the defence of demonstrators. Standing as a competent jurist on the side of a movement fills it with pride and dignity: the confrontation with the almighty state power is not like down the street, where the police mechanism is highly equipped and usually beats off the demonstrators; in the courtroom, a good legal defence along with conscious defendants can not seldom celebrate victories against the state.

Then a progressive lawyer must be a solidary lawyer: once again we come across a hard definition, but I could give it a try saying that a solidary lawyer is one who sets the financial aspect of the mandate aside, because he/she is touched by the cause of the struggle to a certain extent. The values at stake are what moves most the lawyer in this case, rather than the professional aspect. In this direction, the lawyer should be able to even defend people that he doesn’t particularly like, if he recognises that the political-legal-human rights stakes are of greater importance the person of the defendant himself. Ceren’s example of the not-solidarity for persecuted judges and persecutors who had taken bad decisions against Kurds etc. in the past gives food for thought in this direction. I can realise what it feels being overloaded and it’s fair enough giving priority to solidarity to other people who deserve it more. But let’s assume the case of such a judge was the only one; should we then leave him alone due to his past decisions or consider the importance of the independence of judiciary and the separation of powers and support him?

A side that wasn’t particularly discussed in the panels is the structure of the office of a progressive lawyer. Lawyers‘ collectives are rather an exception, but can a progressive lawyer be solidary to the movements while he exploits for instance some young lawyers? Can a progressive lawyer work in a hierarchically structured environment and support at the same time emancipation struggles? It’s a long discourse, many fascinating stories could then be heard, as well as experiences of dissappointments. But in an effort to be precise about which lawyers AED represents or includes, I think that this is an important aspect. Of course, the accumulated experience of the legal teams is a relevant topic; AED c proud to have supported most if not all of them.

A further question regards the presentation of political contents in the courtroom. I tend to believe that this is rather the duty of the defendants themselves; the lawyer has to understand the political frame, try to deconstruct the inconsistencies, denounce the indictment, uncover the plots of the police, but not replace the subject of the struggle. It’s often tempting to politicize during a trial; experience has taught me that resisting this temptation gains the respect of the judges which is then reflected positively upon the defendants themselves. And after all: criticizing the behaviour of the police, the system of justice, the law, the processual misconducts, making mistreatments public, suing cases of torture etc – isn’t all this political enough? Presenting the cause of a struggle, its achievements and its goals, this is all a task for the defendants in the first place. 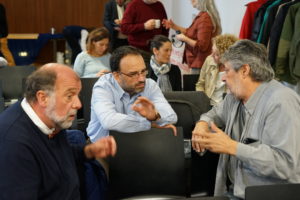 One of the questions also raised today concerned the independence of the lawyer from the client. Should the lawyer present any argument the defendant wishes? Or the contrary: I happened to defend a group of nihilist anarchists who asked me to refrain from any legal arguments during the trial and just denounce the methods of the antiterrorist department etc. I rejected. I think that a lawyer should preserve his/her own dignity. This component „free“ in the word freelance or in the even better word Freiberuf has to mean something, doesn’t it? Or another example has to do with the limits that everybody lawyer sets to himself: can somebody defend a guy who accuses his comrades? Who just changed his mind and regretted former actions? Who is possibly a consequent fighter but too macho within his group? I don’t intend to risk even general answers, because they’re a personal matter of each one of us. What’s for sure, we should see the freedom in our choices while exercising our profession as limitless; if we don’t want it to let it be restrained by the judges, we certainly cannot let our clients deprive us of it.

Actually I don’t think that my intervention contained the conclusions it was supposed to. But since there was a „view ahead“ in the initial programme that waw originally sent to me, I just made some sporadic remarks about that. But I’m convinced that AED has the experience, the determination and the potential to view ahead in the next 30 years.