Stop Police and Judicial Cooperation with the Turkish Republic!

We call for the immediate Stop of Police and Judicial Cooperation with the Turkish Republic!

Turkey’s recent history has been marked by the destruction of internal standards of the rule of law and external aggression and war crimes contrary to international law. Neither the bombing of its own civilian population in 2015 and 2016 nor the transformation of the Turkish state into a presidential authoritarian regime in subsequent years resulted in a decisive reaction from our Governments. Neither the dismissal of more than one hundred thousand civil servants, the imprisonment of hundreds of journalists and lawyers, the draconian persecution and punishment of those who exercised their democratic rights, election manipulations, nor the non-recognition of election results Erdoğan did not like, as well as the attack on the Syrian-Kurdish region Afrin, which violated international law, were grounds for our Governments to question the cooperation with the Erdoğan regime. An unspeakable reason for this silence is the alliance formed with Erdoğan to prevent the further migration of refugees to core Europe.

In view of the current events in Northern Syria, we demand from our Governments to finally draw the long overdue consequences given the violations of human rights and international law by the Turkish authoritarian regime.

Athens-based lawyer Yiota Massouridou of AED-EDL explains: »The Turkish state has openly justified its aggression against the North-Syrian Kurds, which is contrary to international law, with the aim of exchanging the current population. A state which propagates ethnic ›cleansing‹, in which fundamental civil and human rights do not apply, in which arbitrariness prevails and which commits crimes against international law must not be treated as a partner by any European government«.

In view of the political persecution of any opposition, the violent oppression of the Kurdish minority and the obvious cooperation of the Turkish state with terrorist organizations such as the Islamic State, police and judicial cooperation with the Republic of Turkey bears the real danger of the involvement of European authorities in oppression, torture and state terrorism.

Berlin-based Lawyer Stefan Kuhn of the Organisationsbüro der Deutschen Strafverteidigervereinigungen clarifies: »Only by strictly refraining from judicial and police cooperation with Turkish authorities, it can be ruled out that repressive measures, torture and unjust judgments are carried out in Turkey through information provided by any European authority. Conversely, courts and authorities in EU member states may not use any information suspected of having been obtained by methods contrary to the rule of law. The EU Governments must not support a criminal regime«. 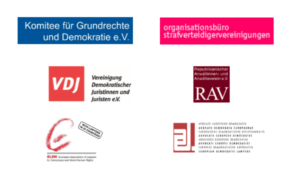